Like all trainers I read and borrow a great deal from others. When I am facilitating creative sessions I use a wide range of techniques from the experts and from fellow practitioners. I always try to recognise the author and to recommend their books if people find the processes that we are using to be useful and effective.

One of my Creative Thinking heroes is Edward De Bono. I have most of his books and have attended many sessions that taught his techniques. One of the most well known commonly used methodologies is the Six Thinking Hats.  (If you Google the term, be prepared for lots and lots of references). However I have found that some groups just struggle to make the six hats work for them. Some get so wrapped up in the detail of the process that they lose site of their goal, others dismiss it because they tried it before without success, others still seem inhibited by the idea of wearing different coloured hats (even if they are imaginary).

However De Bono created the Six Hats as a tool to access a powerful principle that he called parallel thinking. In short it is the process of getting everyone to look at all aspects of an idea or problem from the same “cognitive stance” i.e. we will all look at the positives or the idea together, or we will look at the negatives together. This approach saves time and energy required to battle on behalf of new ideas. Parallel thinking takes the Ego out of the discussion around new ideas. It turns debate into dialogue. De Bono is not the only one to tap into Parallel Thinking the Disney Creative Process uses the construct of three rooms (the dreamer, the realist & the critic) to achieve much the same result.

So here is my version, I find it works very well with business groups who may be a little suspicious of anything that seems like a gimmick. It is a variation on the six hats (and offered with the utmost respect to Professor De Bono) We call it the 360° idea review. It is slightly more directive a process than the six hats but is very flexible and a very effective way to promote real discussion.

The 360 Idea Evaluation is a combination of Six Hats and Disney Creative Process (and other) methods which allows the group to work around an idea (without the need for dressing up or extra rooms).

1. Ask the group you are working with to abide by the 360 rules as they review the idea.

Tell them that we will look at the idea from all angles and that the aim of the exercise is to be sure that we make the right decision for the right reasons..
Remind the group that as a result of the discussion, we may decide to

Make sure that everyone understands that the purpose of the dialogue is to explore the idea together.

2. Put a flipchart page on the wall or table. Make sure that everyone can see it and contribute to the discussion.

3. Using the 360 checklist, start the discussion at Instinctive Reaction at the top of the chart. Remind the group that you would like them to give their honest and instinctive response to the idea but not to provide any justifications or reasons.

It is important to get everyone’s ‘gut reaction’ to the idea because it allows emotions and instincts out and acknowledges that they are an important part of the process. This, in turn, allows people the space to look at the idea from multiple perspectives without ego issues clouding the dialogue.

Use the questions listed below as a prompt to get the discussion going. Record everyone’s answers.

4. Then move round the chart to the Data section. It helps to move either the group or the chart so that everyone is looking at it from the same perspective.

Now ask everyone “If we were to move ahead with this idea
a) What information/data do we need?
b) What do we already have?
c) Where will we get the information?”

Remember, this is not a debate about whether the idea is any good or not simply a discussion about what data we need to explore it further.

5. Next we look at the Strengths and Benefits of the idea. Once again, we move the group/chart so you are all looking at strengths from the same perspective.

Remind the group we are looking only at the strengths of the idea and the potential benefits that it might bring. Record all input.
6. The next step is to discuss the Problems & Risk associated with the idea and to identify any issues that might arise from implementing the idea.

Remind the group that no decision will be made at this time, we are simply surfacing problems that might sink the idea at a later stage.

7. When we move to the next step, Development, the whole group works together to mitigate the problems.

They can use any brainstorming technique to do so, or simply start the conversation with the question;

“If we had no choice but to implement this idea, how would we go about doing so?”

8. Finally, ask the group to step back and to Review & Decide. Review the process that you have been through. Check that the idea has been developed enough for people to feel that they can make a decision.

Remind the group that in innovation, the decision is rarely “yes” or “no” and that we may decide to do something in between (see notes for step 1).

If you have a number of options you may, as a group, apply some decision-making techniques such as “paired analysis” or “weighted rankings”

Lets talk about you (not me) 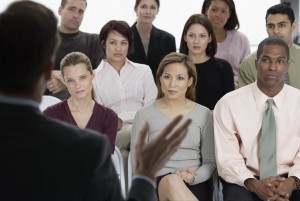 I have just done a favour for a client they asked me to review a presentation that they are making as part of the tender process for a significant chunk of business.

The presentation arrived (all 18Mb) of it and within three pages could see a reason not to do business with this company.

Slide 2 A fourteen point agenda slide , bullets 18pt no visual content at all ( I suppose they were working on that age old maxim tell em how you are going to bore them, bore them , tell em how you just bored them.)

Slide 3 A brief overview of their company history and operations.(all about us)

Sadly I see this all the time, a golden opportunity to impress and engage the group is wasted with a formulaic and self centered approach.

When I took this up with my client (who doesn’t mind me writing this so long as I protect their anonymity) They argued that they always started their presentations this way…! In fact they could point me to an internal document from their Marketing department that suggested this was the company standard.

Talking about your agenda and your company at the start of a presentation is almost always counter productive. In a competitive tender the client wants to find out why you are the right partner for them so talk about them first.

There are many ways to do this but as a default mechanism start your presentation with a review of the client’s objectives. What are their objectives? What do they want from the partnership? If you cant answer these two questions prior to the presentation then you shouldn’t really be there.

Do your prep, and remember that the presentation is all about the client, their objectives preferences and needs. If you start talking about you, people start to switch off, talk about them first and you make it easy for them to tune in to your presentation. When you have their full attention, when they are fully engaged then you can tell them why you are their best solution.

If you have an important pitch coming up and you want to talk it through drop me a line it is amazing how your chances of winning (or at least achieving your stated objective ) can be dramatically improved with just a few amendments.

To be somewhat Polly-anna about our current economic situation, I have always believed that we tend to do our most interesting and exciting work when our backs are ,so to speak, to the wall. I set up my last company in the early 90’s during what was a puny little recession in comparison to our current (mighty and global)credit crunch.A friend of mine who was in banking at the time tried to persuade me to stay put in my job arguing that the first two things to disappear in a recession were advertising and training, and with a grave nod and a headmasterly stare he reminded me that we were about to start a business training people in advertising. In truth I think that business was all the better for being a “bootstraps” venture. We couldn’t buy any training content so we wrote our own, we couldn’t hire a sales team so we went out and pitched for every scrap of work. As we grew the knowledge that we could survive and thrive in a credit restricted world gave us huge confidence even when he banks were throwing money around.

Design guru and retailer Terence Conran in a recent Guardian Magazine talked about the Habitat experience in the UK in the 1970’s. Habitat an up market furniture and interiors store responded to the 3 Day week, the energy crisis and the collapse of the UK economy by launching an affordable range called Basics, this was subsequently franchised to a Japanese company called Seibu who subsequently opened stores called Basics which eventually changed it’s name to ………………………Muji.

Just think if you have an idea to save your customers money in the short term, you could end up with a brilliant product or service in a few short years.

Be brave, but don’t be stupid, real innovation comes from resourcefulness and playfulness, when you haven’t got enough to do what you’ve always done do something better. 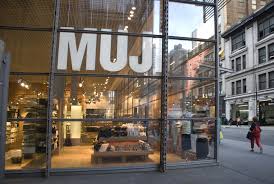 So here we go, this Blog is for all the entrepreneurs, business leaders, and sales people that it has been my pleasure to work with as a colleague, client and supplier. The reason for the blog? well I meet hundreds of people each year in a professional capacity as trainer, salesman, coach and conference speaker and my job is to try and answer peoples questions in what I hope is a clear and useful way.

The problem is that often as I drive away from an assignment or settle comfortably into my seat on the train, I start to remember a whole stack of additional material that would make a useful contribution to our conversation. Or I meet someone the very next day who has a particular experience or insight that would be really useful in answering yesterdays question. My Blog therefore is a means of keeping track, catching up and following up on all the stuff that I do day to day and all the topics that fascinate me in business, sales, leadership, creativity and learning.

The catalyst for this process was the recent (September 2008) Business of Software Conference in Boston Mass. This conference is attended by around 300 software entrepreneurs. I still consider myself to be an entrepreneur and two days in the company of people so totally committed to their creative ideas was an inspiration in itself. Having forgotten to switch my Blackberry off during my presentation I was aware of the constant buzzing as delegates emailed their comments to me from the audience. Talk about instant feedback! Anyway the gist of the emails tended to be ” loving the presentation where’s your Blog?” (those who were hating the presentation had the good grace to keep their thoughts to themselves).

Ultimately I hope this blog will become the natural extension of of my other training, coaching and consulting activities. Please feel free to comment, pose questions and to explore issues further.